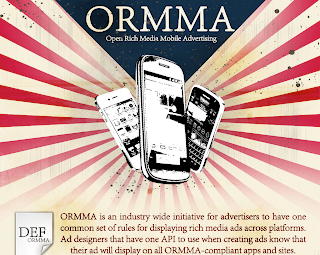 In April of this year, several ORMMA members started work with an IAB Working group to define a common API for mobile rich media advertisements based on the ORMMA project, establishing a framework of principles and guidelines to help the mobile marketplace reach new levels of consistency, efficiency and effectiveness.
The ORMMA thought leaders from The Weather Channel, Pointroll, Crisp Media, AdMarvel, Goldspot Media, Yahoo and Google were closely involved. There were also 20 other companies involved, such as 24/7, Accuweather, Mediamind, NY Times, Medialets and Microsoft to name a few. The discussions resulted in simplifications and adjustments to the scope of the proposed APIs, solving problems for various constituencies.
Now, this process has produced MRAID (Mobile Rich Media Ad Interface Definition) which is still based on the ORMMA API and is similar enough that it is practical for ORMMA to share the basic API. However, there are a good number of important functions that are supported by ORMMA that won’t make it in a 1.0 version of MRAID. So, what is next?
You can download the 40-page MRAID specification here.
Here is a link to the full press release from the IAB.
Posted by Xavier Facon at 8:56 PM 770 comments: